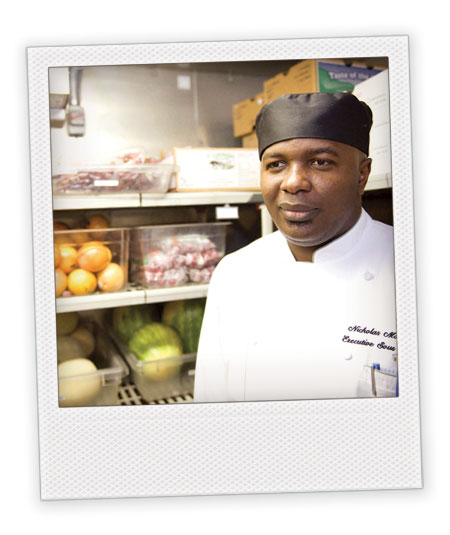 Nicholas is a graduate of the Culinary Management Program at George Brown, where he was the recipient of many awards, most notably Dean’s Honour Award, Outstanding Academic Achievement, Certificate of Recognition for Participation in Culinary Competition-Taste of Canada 1994, Bronze Medal Taste of Canada 1994, and Honourable Mention for the Creation of Recipes for ED Smith Co.

Nicholas is also a graduate of the International/Creative Cooking program at Western Catering School in Montego Bay Jamaica, winning awards for Most Outstanding Student and Certificate of Distinction in Catering.  Rounding out his business acumen, Nicholas also earned his Certificate in Business Management at Cornwall College in Montego Bay.

Nicholas commenced his culinary career at Sandals Royal Caribbean, where he spent almost two years at this resort, rated one of the best resorts in the Caribbean and recipient of four star status for food, service and most outstanding resort overall.

Nicholas began his Canadian experience as a chef trainee at Movenpick Restaurant, where he was awarded Employee of the Month and the Movenpick Marche Award during his one-year tenure.  He then moved on and spent a year as Sous Chef at the Chapeau Restaurant, with responsibility for creating new menus and daily specials.

From there, Nicholas went on to The Senator on The Square as a Sous Chef for a one-year period, where he was responsible for the development and preparation of innovative and creative dishes.  His next step in his career and culinary development was as a Chef de Partie at the Sutton Place Hotel, rated one of the best hotels in Toronto, where he spent the next two years.  Moving on, he then joined the Waterside INN as the Executive Sous Chef, the first hotel of its kind to be built in and around Toronto in over thirteen years.  This sophisticated hotel catered to corporate clients and was complemented by modern French cuisine.

After spending a year at the Waterside INN, honing his culinary management skills, Nicholas then joined the CN Tower-360 team in March 1999 as a Sous Chef. During his tenure in this position, he was instrumental with menu input, plating, human resources, training, scheduling, and catering service.   His success in this role earned him the recent promotion to Executive Sous Chef.